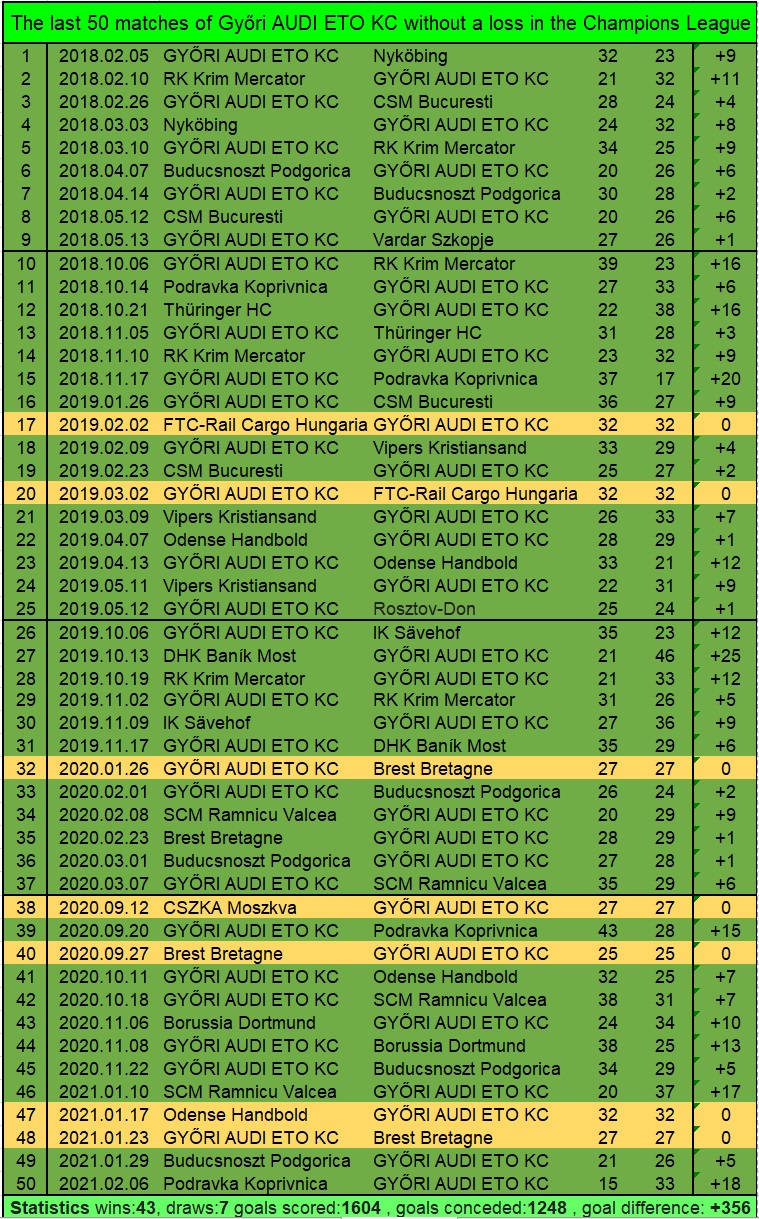 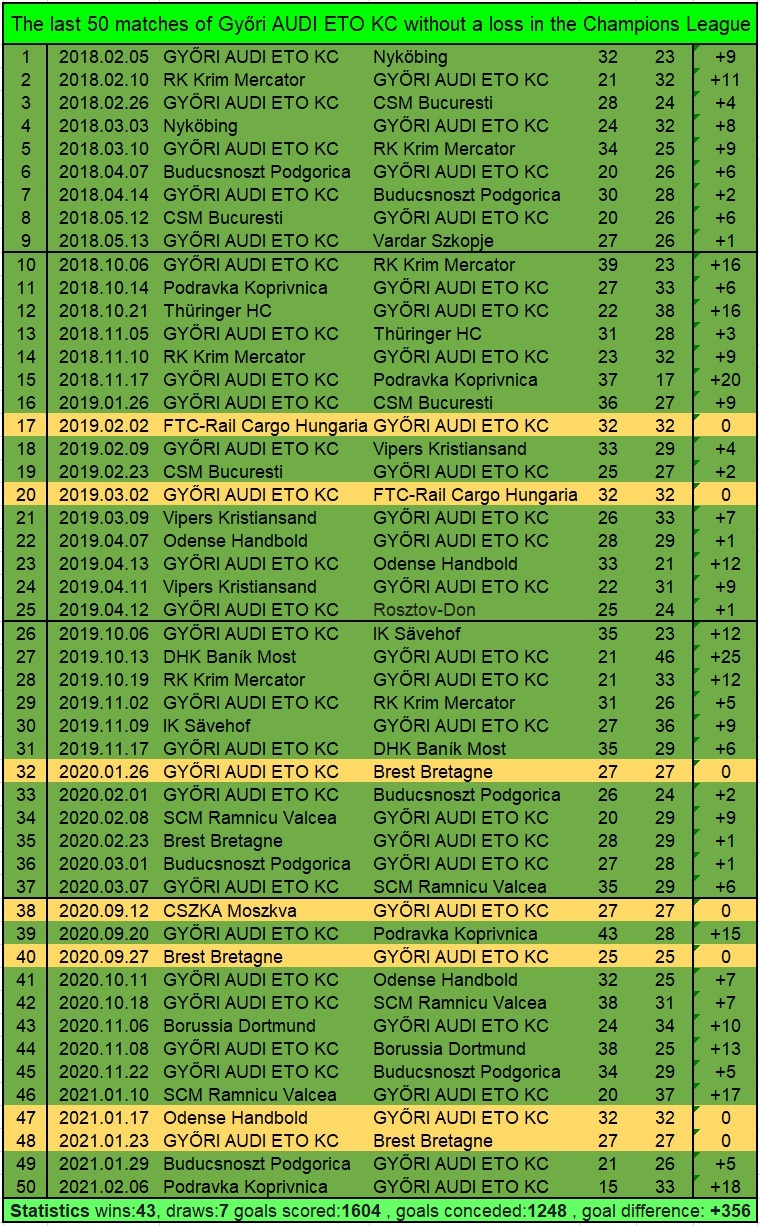 I know, I was there!

“We were definitely looking for a routine, heavy-duty, success-oriented head coach to lead the team, and Ambros Martín met all the conditions perfectly. We know each other well, we didn't have to introduce ourselves, the negotiations went smoothly. He will take over a whole new team from the summer, with only three players he worked with in his previous era. Of course, a lot has happened with him and here in Győr over the last 3 years, but it has not changed that we will continue to fight for the highest goals. I am pleased to welcome him again in Győr from summer to two years in the position of head coach of Győri Audi ETO KC. ” said President Dr. Csaba Bartha.

“I was pleased to hear that I am in the interest of Audi ETO. For me, this is really more than a return, as I told you in the summer of 2018 that Győr became my home, and now I am returning home. We have a two year contract and I am looking forward to working together. Győri Audi ETO KC has been at the top of handball in the last three years as before, but there are many areas, I am thinking mainly of regeneration and rehabilitation, which have undergone tremendous development in recent years. In Győr, everything is given for success, and my goal cannot be other than to fight with the team for the very first position on every front next season. ” said Ambros Martín. 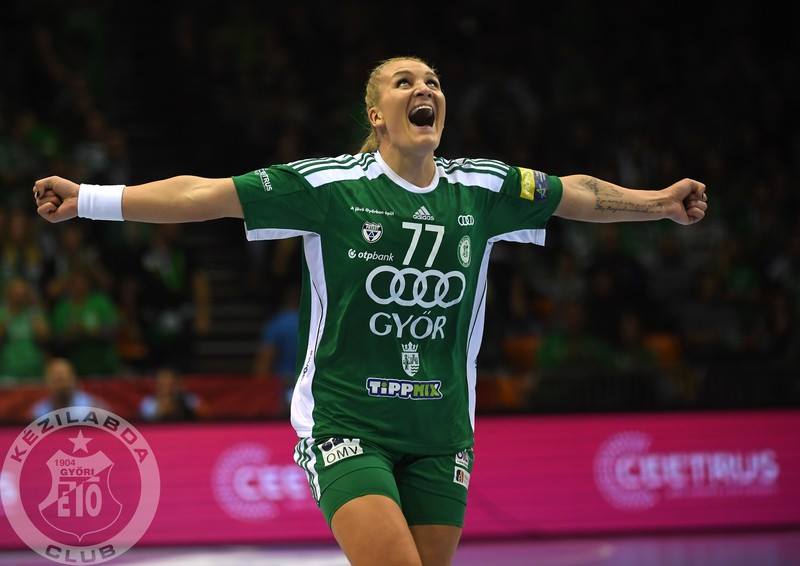 “Crina Pintea produced a memorable half year in our team in the 2018/19 season. When she left, we both felt there would be another sequel. I am glad that the opportunity to play in Győr has come again. We are maximally aware of how professional player she is, who is very determined and hungry for success. With her mentality and knowledge, she fits perfectly into our team. Crina Pintea signed a two-year contract in Győr. ” said Dr. Csaba Bartha

"Yes, the news are true, I will continue my career in Győr again from the summer!" begins Crina Pintea. “It is a beautiful memory for me having spent half a year in Győr, because in the half year we won everything with the girls. I won the Champions League with the team, which is the biggest success of my career so far. I look forward to working together with them from the summer, I want to continue collecting gold medals. ” said Crina Pintea. 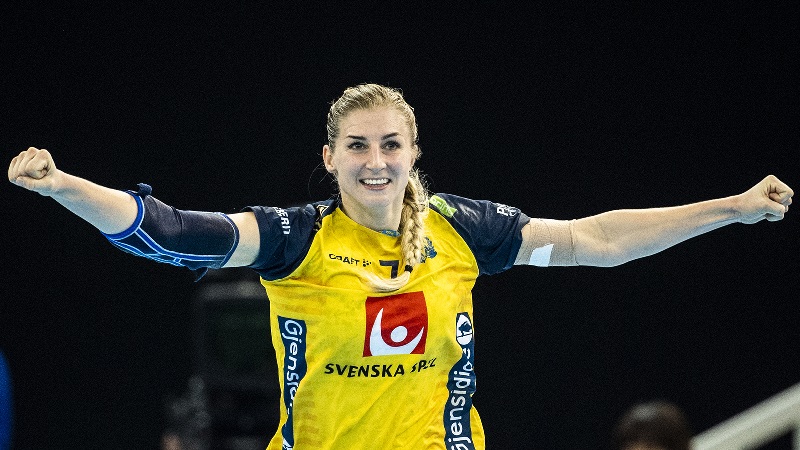 “I am pleased to announce that we have managed to reach an agreement with the Swedish national team player Linn Blohm and she will transfer her headquarters to Győr from the summer. Linn is a routine player, she is a big threat to the opponent's goal in attack, and she is able to do an incredible job in defense, which will be needed from the summer. We’ve been following her performance for a long time, she’s been constantly evolving, and I think she’s ripe for it to prove it at the highest level. We have signed a two-year contract. ” said Dr. Csaba Bartha.

BLOHM will benched both Brattset and Pintea ...at least in important and edged Gyor's matches when need 100% atack...100% defence power from a speedy,mobile and strong pivot who make very well both phases .

Deeply regret her departure from BM !

I think Martin want Pintea only for defence in encounters ag teams who allowed changes btwn atack-defence ,so called 'oldish' playing teams.
Top

Eduarda Amorim leaves Győr after 12 years. Thank you for everything Duda, good luck in Rostov-Don!

"I had plans to stop but this new opportunity come along, and I decided to take it. It was not an easy decision to make of course, but I feel a new challenge will be good for me. I would like to see how it is to work with a different atmosphere, and different impulses. I am not getting any younger, and this is my last chance to try a different place. My history in Gyor is very beautiful, and I will be always grateful for how the club, city and fans have accepted me. I am really proud of what we have achieved together in these 12 years. It is important for people to know that the fact that I will play for another club one more year won’t change my love and the respect I have for this club and this city. I have spent my most beautiful years in here, so Gyor will be always a important part of my life and I will always cheer for the success of this place. Additionally, it is also important to mention my ambitious are the same. I still want to win all the tittles with Gyor not just for me, but for everyone who has been supporting me during all this period. It is important to for me and I really hope I can finish my cycle here with a flourish. " – said Eduarda Amorim

“Eduarda Amorim is an iconic player of Győri Audi ETO KC, she has been strengthening our team for more than 12 years. At the club level, she won everything possible with the team several times. In previous appointments, she informed us that she would end her career at the end of the season. For the next season, knowing her retirement, we put together the club’s player squad for next year, as she had to find a replacement in both attack and defense. At the end of January, after the transfer issues had been closed at the club, Eduarda informed that she had reconsidered her previously announced retirement and still did not finish her career in the summer of 2021, but did not plan to continue her career in Győr. We regret her decision, Győri Audi ETO KC thanks Eduarda Amorim for the last 12 years, and we wish her much success from summer at her new station. Of course, it is not a question of continuing to fight together this year to achieve common goals. ” said the club leader Dr. Csaba Bartha. 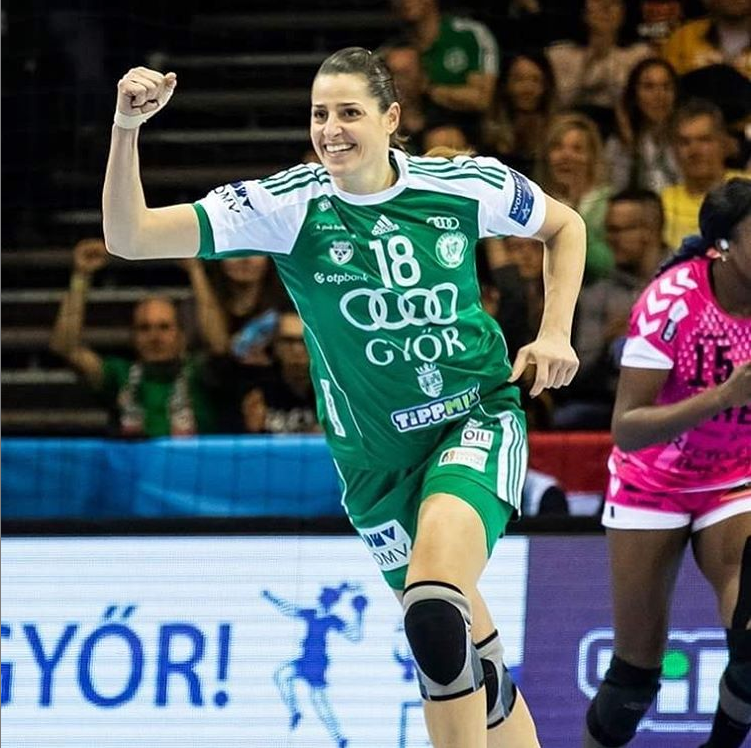 Anita Görbicz will continue her career in a new role from this summer.

In the summer of 2021, a defining moment will come in the life of Győri Audi ETO KC and Hungarian women's handball. Anita Görbicz finishes her active player career. The exceptional player is not only a legend of the Győr and Hungarian handball, but also there are only few icons in the world like her. The player won’t be separated from the ETO family, as she is expected to play a new role in the club's management.

"I have decided earlier that this would be my last season as a player. I'm sure it's going to be strange to stop playing for good, but there's a time for everything. I owe a lot to the ETO. I had serious offers, but I could never imagine playing anywhere else. When it came to the end of my career, President Csaba Bartha said that there was no question that I was expected off the field, which I really appreciated on the one hand, on the other hand it was consistent with my ideas. This season I have had a little bit of a look at a new role, as a player and as a coach I have been counted in Győr. But I had to make a decision about which way to go from the summer. Regarding with the consultation with Mr President, we have agreed that I will work for the club as sports director from 1 July. This will be a new task for me, but I am not scared of the challenges, and I am very happy to continue to work for the Győri Audi ETO KC, even if it is no longer primarily about scoring goals. Naturally, right now I'm focused on the tasks of this season, because we would like to lead the team to victory with the girls on all fronts," Anita Görbicz said.

"Anita Görbicz is the legend of the modern handball is. She's a fan favourite, a role model for a lot of players, generations have grown up watching her play and she's also the epitome of club loyalty. Definitely The ATHLETE in Győr. Anita's career is unique and I am very confident that we can achieve more success together in this year. For sure, we are also prepared for the day when she will not wear the captain's armband and will no longer play as a player. There was no question for a second that Anita would continue her career at the club after the handball court. The club needs its legends and has the will to continue working in a new role. In the summer, a great player career ends, but at the same time we open a new chapter, Anita Görbicz joins the management of the club and continues to work as sports director of Győri Audi ETO KC for the success of the club. I'm sure that she'll be able to do that too!" said President Dr. Csaba Bartha 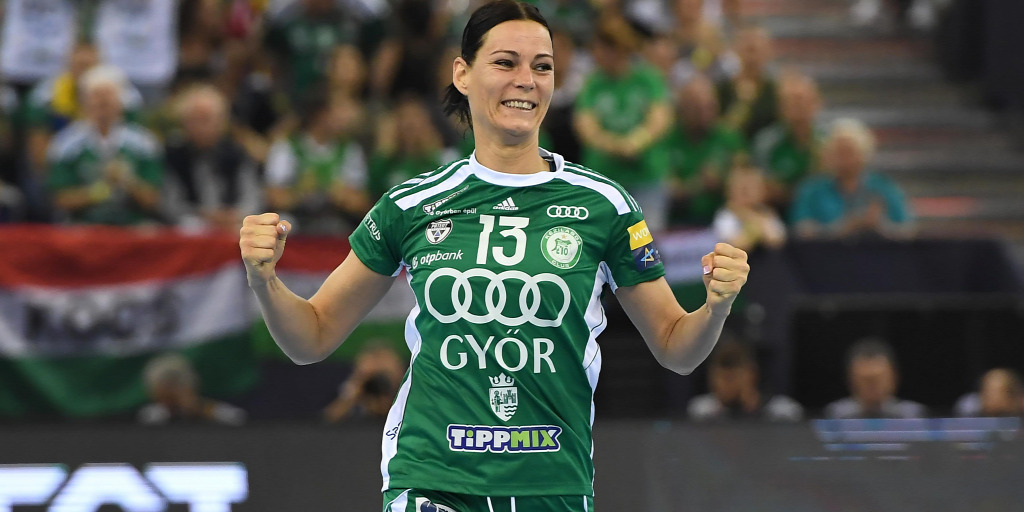 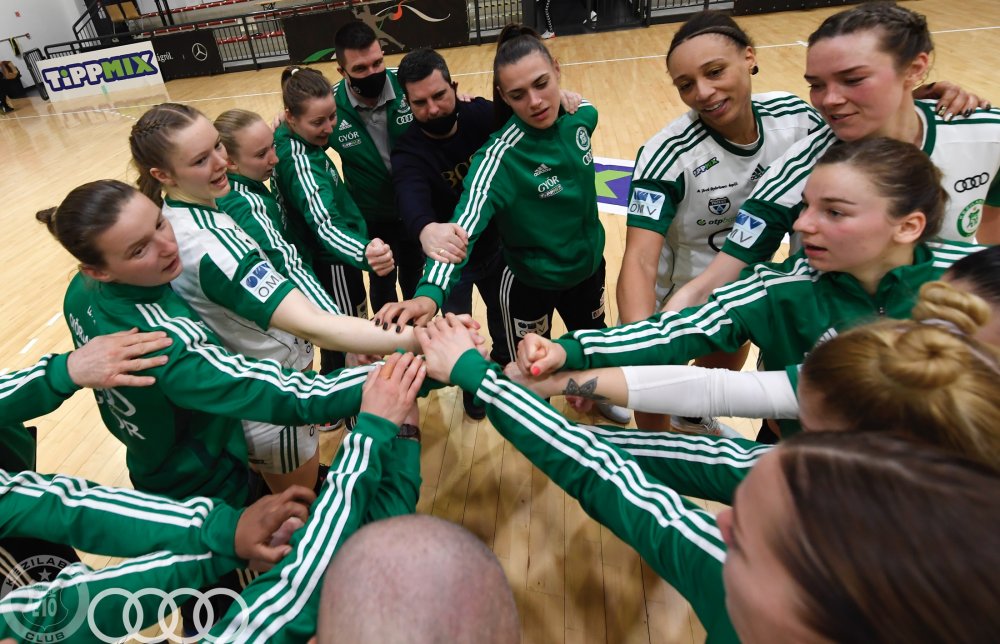 THE BLUEPRINT: HOW GYÖR BECAME THE BEST TEAM IN EUROPE

"What makes a handball team truly great? A question many have tried to answer, yet there is no definitive recipe, no plan that cannot be derailed by injuries, lack of chemistry or problems that might arise during a season.

However, one team has strived for greatness and accomplished it, by turning a generation into a dynasty and winning Europe's premier club competition five times between 2013 and 2019.

Despite playing fewer games than other powerhouses such as Buducnost and RK Krim Mercator, no team has won more than Györi Audi ETO KC. Györ has both the largest number of wins in history, 171, and the best winning percentage in the DELO EHF Champions League, 74.3 percent." 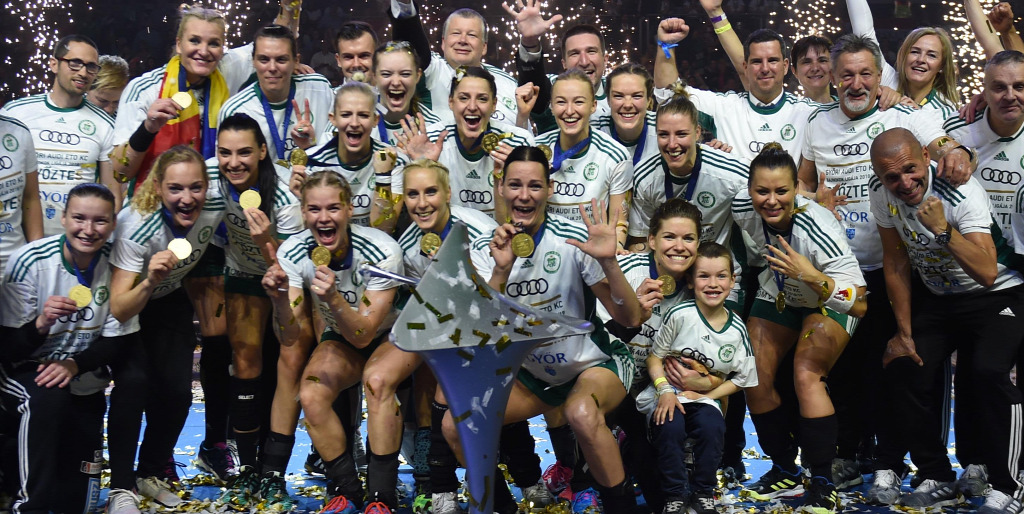 The legends of Győr were the last to play a match in Győr in the Champions League. We will never forget you, you wrote history! Görbicz Anita, Eduarda Amorim.

Indeed.
Those two are the first thing that comes to my mind when it comes to Gyor.
Great players and it will be very strange to see Gyor without them.
I guess it is really hard to say goodbye.
They remind me of good times and rivalry between them and my team that was fun to watch.
I miss those days when handball was handball.
Top

Users browsing this forum: No registered users and 13 guests